You are here: Home / Leadership Team

At Yass Valley Anglican Church we believe all God’s people participate in ministry according to the Holy Spirit’s gifting and call. We are led by a team made up of one full-time minister (the rector), two volunteer ministers and a number of lay ministers operating in a variety of ministries.

In addition, there is a parish council made up of parish councillors and wardens from each of the four worship centres (Yass, Murrumbateman, Bowning, Mundoonan).

All Saints Murrumbateman has its own vestry (council) made up of the rector, wardens and elected members.

Phil became the rector of Yass Valley Anglican Parish in April 2021. Phil grew up in the Central West of NSW and has previously served in ministries across Canberra, Sydney and Darwin. Phil came to the Canberra-Goulburn Diocese in 2019, having completed theological studies in Sydney in 2016. He loves seeing the Word of God transform lives and has a passion for preaching the Good News of Jesus.

Phil is currently on leave

Judy grew up in a strong Christian environment and finds great nurture and stability in Anglican traditions. Her heart has always been for the community around her, and she sees God’s call to her in this area. Ordained ministry has been her response to living out that call on her life. This is reflected in leading services, home groups, NSW Police chaplaincy, and extensive pastoral care. Judy continues in theological studies.

Judy and her husband John have lived in Yass for ten years. They have four adult children and six grandchildren, a dog and a cat.

Reverend Steve Neuhaus has broad experience as a parish priest, and as a Chaplain for the Defence Force and the Police. Yass a been his home for many years along with adult children and younger grandchildren. Steve has a keen interest in outreach to the Veteran community. 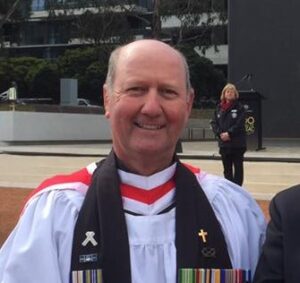