You are here: Home / Parish History

The History of the Yass Valley Anglican Church Parish is closely related to European settlement in the colony of NSW.  Seventeen years after Hamilton Hume, his brother John, and brother-in-law George Barber had explored the area looking for grazing land, the (Church of England) Parish of Yass was formed in 1838. It is one of Australia’s oldest ecclesiastical foundations, having celebrated 175 years of service in 2013, and spread over a huge area.

The first formal services in Yass were held in the original courthouse, a practice Bishop William Broughton, on his visit in 1840 discovered many people found unsatisfactory. He arranged for a building listed as a subscription library by the banks of the river to become the place of worship for the Church of England. The building was 6m * 4m, a bell was hung in a nearby tree and services were held there until St Clements was constructed, and able to be occupied in 1850.
This building fell into disrepair and following floods and then a fire was destroyed in the late 1850s.

The initial size of the Yass parish was enormous, and we stand in awe of the early clergy who ministered to an area stretching from Binda to the North and Burra to the South – on horseback.
As time went along new parishes were created, and churches once in this parish moved to them. North of the present Yass parish are now Boorowa and Murraburrah-Harden parishes, and to the South; Canberra and Queanbeyan Parishes. 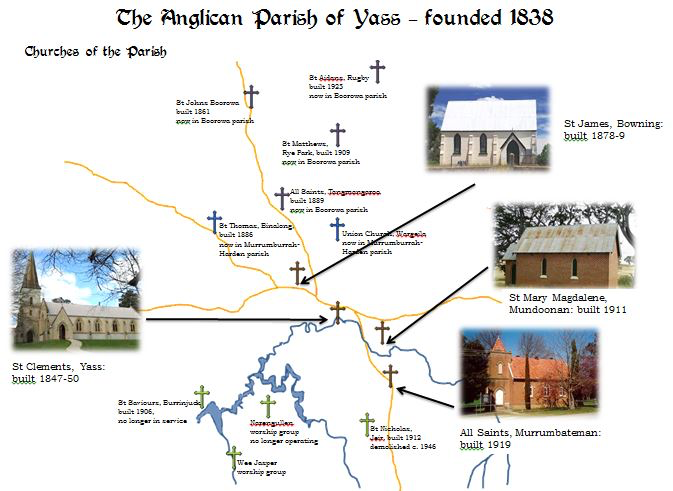 A timeline of the Parish can be viewed here..

Within the boundaries of the present parish a number of historical churches no longer operate.

The Anglican churches currently operating in the parish are:

If you have a past connection with parish that you would like to tell us about we would love to hear from you.

Please fill in the following form and lets start a conversation.